skip to main | skip to sidebar

A simple graphic explains why I am the man. 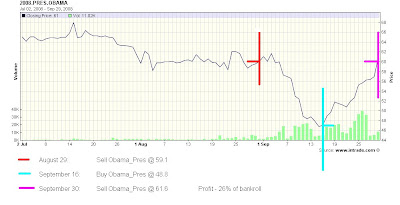 This is how one goes about making money on Intrade - spotting trends before they happen. I correctly predicted (4-5 days before the markets responded) that McCain's VP pick was a game changer. I unloaded all of my Obama stock on Aug 29.

Meanwhile, my prediction about the general election is unchanged since February. That is, the only way McCain stands a chance is if the economy is booming and Iraq is pacified. Once the financial crisis hit on September 16, everyone knew Obama's numbers would go up.

I sold all of my Obama stock at 61.6 tonight because I think thats pretty close to the natural equilibrium value. It won't go much higher or lower (max of 70, min of 55) unless something crazy happens between now and then. I'm interested to see how Palin performs in the VP debate on Thursday, or if Biden says something really stupid. Alternatively, many of the state electoral vote races are VERY close right now. The trades below represent the most hotly contested states right now. The numbers below represent the probability that the corresponding state goes for Obama. Obviously, subtract that number from 100 if you want to find the probability that the state goes for McCain. Look how close Indiana is!